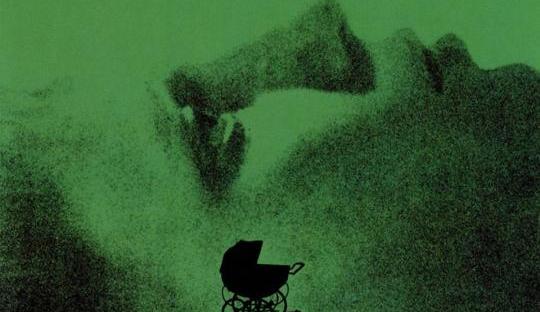 This week I’ll be reviewing a classic, Rosemary’s Baby. This is honestly one of my favorite movies. Not just horror related, but just in general. Every time I watch it I catch something I missed the last time, and it makes it really interesting to keep watching over and over again. This movie gets four stars, Actually Enjoyable, because I really love a lot of the movie, but the things that are problematic are really problematic.

What the Movie’s About

Rosemary and her husband – Guy – move into a new apartment in what I’m assuming is a nice neighborhood in NYC (New York City). She gets pregnant, and the elderly couple (Minnie and Roman Castovet) that lives on the other side of their wall take a great interest in her pregnancy. When Rosemary’s actor husband begins getting more recognition, Rosemary begins to suspect there is something more sinister going on.

CONTENT WARNING: This movie does contain sexual assault/rape (by the devil). It’s more implied than actually shown, but I’d hate to send someone into this movie not knowing. Also, it’s never called as much, but I’m going to put one for verbal abuse as well, since there are a lot of occasions you end up wanting to set Rosemary’s husband on fire.

I like that the first allusions to something being strange is in the first few minutes, before Rosemary and Guy even decide they want the apartment. There’s an armoire in front of what the realtor (?) states is a closet with seemingly no explanation. Moving the thing aside, Rosemary opens the closet and sees that it wasn’t simply put there because “who needs that many closets” as was suggested by one of the men, but it was intentional, though she didn’t know why anyone would block a closet that was clearly in use (“Why would she cover up her vacuum cleaner and her towels?”). It seems almost thrown in, but it’s actually a really well done indication that the woman who lived there prior to them must have known something was off about the closet.

There’s a clear theme of witchcraft throughout the movie, which is both crucial and also super forgettable. A friend of theirs falls ill right after Rosemary talks to him about their neighbors. When we find out what it was he wanted to speak to her about, it’s really strange and doesn’t make a whole lot of sense. It seems like a lot of dots to connect to put together something that, when we learn it, we basically already know.

I honestly would have liked more of this woman that Rosemary meets in the basement. It seems like she meets her, we learn the name of her neighbors, and then this woman allegedly jumps to her death. There’s no mention of her ever again really, she doesn’t serve any purpose except to introduce the Castovets as potential characters. The woman – whose name I forgot to write down – is in no way memorable (I even forgot she existed until I put the movie on for a rewatch). It seems like she’s only there so we learn the names of the neighbors and make a cheap, horrible way to bring Rosemary and her husband into contact with them.

I think one of my biggest complaints in this movie is the scene where Rosemary is raped by what we can only assume at this point is the devil. Before the actual assault, one of the neighbors brings over dessert, which Rosemary doesn’t like. Guy, the husband, abuses her into eating it, which I hate because it signifies how badly abused she is. I’m not sure if it’s because “that’s how things were” in that time period (the late 60s) or not, but so many red flags came up and I just wanted Rosemary to GET OUT. Like leave, get a divorce, never look back, etc. I think the implications of the scene would have been clear even if the scene was taken out of the movie and it felt really unnecessary. Since she was drugged/fading in and out between consciousness, it’s more of a jumbled, confusing mess than it is clear. They could have, I think, easily faded to black and picked up with the next scene, where Rosemary wakes up with scratches on her body and makes a comment about a ‘bad dream’ she’d had.

This is where the movie takes a turn for the better, I think, since we start on this vague mystery of why the Castovets are so focused on Rosemary’s health. Like, it goes way beyond simply “we’re friends and we want what’s right/best for you.” It’s creepy the amount of time and focus they give to her, recommending a doctor, making sure to give her special like, vitamin rich protein drinks every day, etc. I think it’s why the other scene I talked about bothers me so much. Their actions of this older couple are already so creepy, they didn’t need to show us exactly what was going on with the whole Satanic ritual or whatever. Beyond that, while they claim to love her and want what’s best for her, they certainly feel the need to, along with her husband, control every aspect of her life, which bothers me a lot throughout the movie. Rosemary seems to notice this as well, since she’s not nearly as fond of these new neighbors as her husband is. She has her suspicious about them from the get-go.

I had a hard time believing that Rosemary would suffer through as much pain as she claimed to be in for so long without seeking a second opinion on the matter. She has a get-together with her friends and tells them she’s been in pain “since November” while having a mental breakdown and this is the first Rosemary learns that it’s absolutely 100% not normal to be in absolute agony for at the very least the first trimester of pregnancy.

To give Rosemary some credit, she did try really hard to get out of the situation she found herself in. It was how she learned that the conspiracy against her was much deeper than she thought, and wasn’t so much against her as it was against the rest of the world. With Rosemary being financially reliant on her husband, the scumbag actor who traded his wife for the chance for success, she doesn’t end up with much choice but to go home, and since she’s so isolated she doesn’t have any friends she can turn to.

I have mixed feelings about the ending. While I enjoy the lead up to it, I’m thinking there was a stronger way to end it than what actually ended up happening. After fighting so hard for something, Rosemary seems to just switch gears. It’s hard to tell if she’s just tired of fighting, or if she’s there’s some other motive she has. I’ll cover my feeing on the ending in a little more detail down below in final thoughts, but here, I don’t want to be too spoilery.

One of the things I love most about this movie is that you never see the baby. Even when Rosemary looks into the bassinet/crib/wherever you put itty bitty babies, we only ever see its eyes. While in a lot of newer movies, there’s a reliance on the special effects to make moments like this horrifying, this movie doesn’t need any help. While at first, it might seem to benefit from a “monster-reveal” I think this particular movie does much better without one, relying on dialog/etc to get the point across without the need for terrifying monsters or potentially cheesy special effects.

I really like the way they set up Rosemary to be sort of unreliable. Like yes, she doubts her own mind because she’s constantly being gaslit (gaslighted?) by everyone around her who wants this baby to be the Anti-Christ or whatever, but I like that Rosemary is able to stick to her guns, even when she delivers the baby and is told that it didn’t survive. She knows it’s a lie. She heard it crying, and she refuses to believe the people who are basically holding her hostage in her own home.

In general, I really like this movie, despite all of it’s flaws. Don’t get me wrong, they absolutely make me grit my teeth and I’d like to slap Rosemary for putting up with all of the shit that she does from her P.O.S. husband, but if (and only if) you’re able to get through that, it’s a great movie. As much as I hate the idea of defending abuse as a plot device, even for a movie made in 1968, I’m not sure it would have worked if Rosemary had been in a more independent situation. It almost makes it more horrifying, to think that she was already going through this horrible situation that she was trying to pass off as normal and then having all this witchcraft black magic bullshit happen to her.

Did you love this movie?

Hate it? Have differing feelings? Want to tell me I’m super wrong about everything, or point out something you think I missed? Let me know in the comments. And let me know if there’s anything, old or new, that you’d like me to watch and review.